SEOUL, June 14 (Yonhap) -- Senior officials of South Korea and the United States on Wednesday discussed plans for the upcoming summit between their heads of state.

President Moon Jae-in and his U.S. counterpart Donald Trump will hold their first face-to-face talks since they both took office in Washington on June 29-30 (local time).

South Korean Vice Foreign Minister Lim Sung-nam met with Thomas Shannon, undersecretary of state for political affairs, who arrived in Seoul on Tuesday to prepare for the summit. He will stay here until Thursday.

Both sides agreed that the summit will help "further cement the foundation of the two countries' comprehensive cooperation including their collaboration against North Korea," the Ministry of Foreign Affairs said in a statement after the meeting.

Lim and Shannon also reaffirmed that they will work together to sternly deal with North Korea's near-weekly missile launches, according to the ministry.

"They shared the opinion that South Korea and the U.S. will continue to develop joint response measures that utilize sanctions and dialogue in order to fundamentally resolve the issue of North Korea nuclear development," it said. 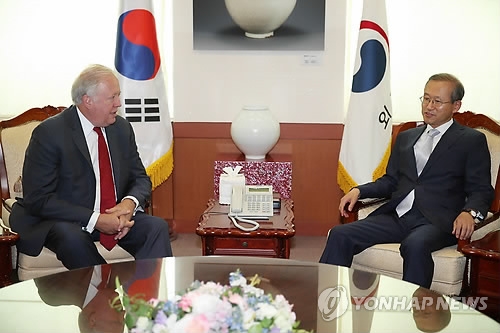 The summit meeting "will be of enormous importance for the U.S. and South Korea, but also for the region and the world because the relationship between the U.S. and the ROK is a global partnership," Shannon told reporters after his meeting with Lim.

He said the meeting focused on North Korea's recent missile launches. "We ... underscored the iron-clad commitment of both countries to our alliance and partnership to protect not just the people of Korea but alliance forces here in Korea and other security partners in the region."

Drawing on the deployment of a U.S. defense shield here, he said that the countries "are gonna continue to work on this in a way that is satisfactory to both countries."

South Korea recently suspended the deployment of the Terminal High Altitude Area Defense (THAAD) battery, which had been under way for months, citing the need for a survey on its environmental impact.

Shannon also confirmed North Korea's release of American university student Otto Warmbier who had been detained in the country for 17 months.

"(U.S. special representative for North Korea policy) Joseph Yun went to Pyongyang to accompany Mr. Warmbier home. He is en route to his home in Cincinnati. I won't way anything else until he is home with his family," Shannon noted.