The KFA gave Stielike a vote of confidence in April. But immediately after his latest loss, Stielike said in Doha that his future on the bench was out of his hands and he'd only discuss the matter further once he returned to South Korea. 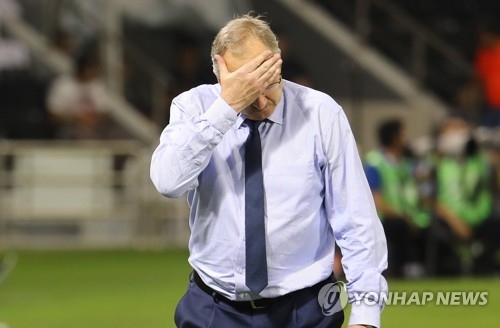 South Korean media have already rolled out possible names for the next national team boss, with most of them pointing to locals as there isn't enough time to search for and hire a foreign coach.

Huh Jung-moo, who previously led South Korea to the round of 16 at the 2010 FIFA World Cup, is emerging as the favorite as he is familiar with the current coaching staff. The 62-year-old worked with chief assistant coach Jung Hae-sung at the 2010 World Cup, while Seol Ki-hyeon, an assistant on the current national team, played for Huh at the tournament.

But Huh, now serving as the deputy commissioner of the South Korean pro football league, hasn't coached a team since April 2012.

Shin Tae-yong, who recently managed South Korea at the U-20 World Cup at home, where they suffered a round of 16 exit, is also being touted as an ideal candidate. The 46-year-old tactician, who also coached South Korea at 2016 the Rio de Janeiro Olympics, was assistant to Stielike before he was appointed head coach for the U-20 team.

Choi Yong-soo, who was recently sacked by the Chinese side Jiangsu, has also been mentioned for his leadership that he showed with FC Seoul in the past. Before moving to Jiangsu, he led Seoul to the K League Classic championship, FA Cup title and a runner-up finish at the AFC Champions League. The 45-year-old, however, has no experience of coaching the national team.