SEOUL, June 14 (Yonhap) -- Police said Wednesday they have arrested a Nigerian man for smuggling large amounts of methamphetamines into the country through international mail from China.

The Gyeongnam Provincial Police Agency has detained a 46-year-old man, whose name was withheld, for illegally sneaking in 605 grams of the drug, worth some 2 billion won (US$1.77 million), on two occasions last week. Each parcel was delivered via international express mail.

The amount is large enough for about 20,000 people, the police said.

The suspect, who lives in Pyeongtaek, south of Seoul, and has a blue-collar job, received the mail from China through Cambodia. The meth was hidden inside women's cosmetics products. 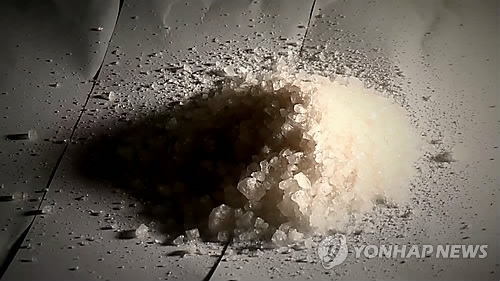 The police received intelligence about possible drug smuggling earlier and impounded the drugs at customs located at Incheon International Airport, it added.

The police said they are investigating whether the suspect had any accomplices.