(ATTN: UPDATES with details at bottom)
By Chang Dong-woo

SEOUL, June 14 (Yonhap) -- South Korean filmmaker Bong Joon-ho on Wednesday threw a jab at the organizers of this year's Cannes Film Festival, saying that it should have fixed its rules regarding streaming-only films before inviting his Netflix-produced movie "Okja."

"It would have been preferable if the Cannes festival would have put the rules in order before inviting us. Inviting us and creating a controversy, what an embarrassment," Bong told reporters at a media event for "Okja" in Seoul.

The Netflix film about the friendship between a genetically modified "super pig" and a farm girl was among 18 titles chosen for the main competition lineup for the 70th edition of the festival last month. 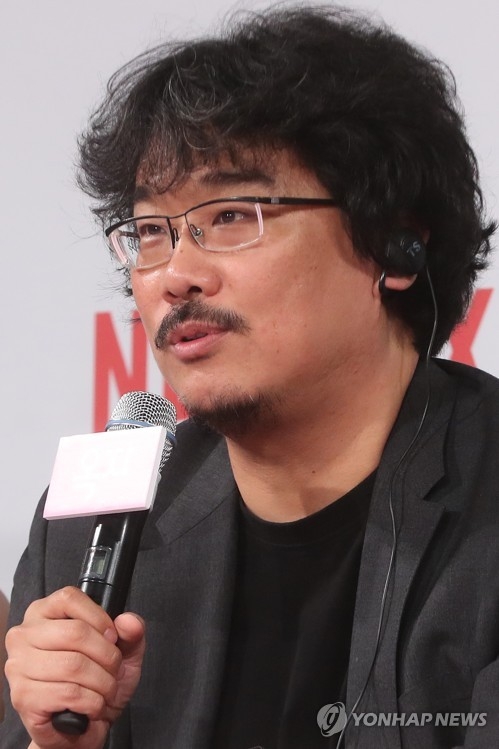 The film isn't without controversy at home though. Simultaneously with its June 28 release on Netflix, the U.S. streaming giant promised that it will make the movie available at South Korean theaters as well. But the country's three major multiplexes -- CGV, Lotte Cinema and Megabox -- are refusing to show the film unless guaranteed a minimum three-week holdback on streaming.

So far the film has secured about 70 independent cinemas for its theatrical showing.

"The controversy was caused due to my cinematic selfishness. I am the one who provided the cause," Bong said, explaining that he envisioned the movie being shown on the big screen, alongside being released on Netflix.

Bong said he fully understands both sides of the row and expressed hope that "Okja" would become a "signal flare" in establishing new rules relating to similarly produced films.

"I fully understand the multiplexes asking for a minimum three-week hold back. Netflix's principle for a simultaneous release should also be respected."