The second annual meeting of AIIB's board of governors is slated to be held on the country's southern resort island of Jeju from Friday to Sunday under the theme of "sustainable infrastructure," bringing together some 2,000 officials and businessmen from 77 countries, including finance ministers and central bank chiefs.

Hyundai said it will offer 100 Ioniq electric vehicles (EV) and 10 Starex vans to be used in transporting ministerial-level officials from the participating nations during the three-day conference.

"The provision of the Ioniq electric vehicles will give Hyundai a chance to promote the quality of its eco-friendly vehicles to participants in the conference that will take up the issue of green infrastructure," a Hyundai official said.

In March 2016, Hyundai unveiled the EV version of its Ioniq that can run up to 180 kilometers on a single charge as part of efforts to tap into the green car segment. Its hybrid version was launched in mid-January.

AIIB, initiated by China, is a multinational agency aimed at spurring Asia's economic growth through infrastructure investment. South Korea is the fifth-largest stakeholder in the AIIB after China, India, Russia and Germany. 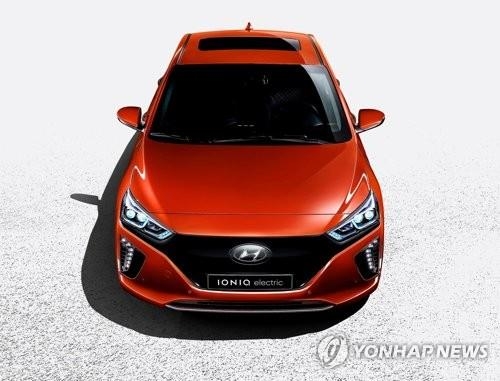