With the latest entry, the total number of overseas news agencies confirmed as subscribers to the PyeongChang News Service Network came to 44.

Fabrizio Caligaris, Paraguay's minister of information and communication, and Park No-hwang, president and CEO of Yonhap, signed the agreement at Yonhap's headquarters in central Seoul.

As the host news agency for the upcoming Winter Games, Yonhap News is developing the PNN to allow news outlets around the world to share content on the Olympics in real time. The system will be completed within the year.

PNN members will have access to not only Yonhap News' content in Korean, English, Chinese, Japanese, French, Arabic and Spanish but also that of fellow members without having to sign separate agreements. The members can upload their content, including photos, video clips and news articles in English and their native languages, to the platform without any limitations.

Also they can continue sharing news content through the service even after the Olympics ends. 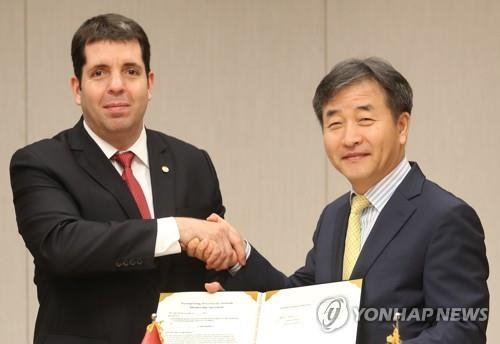