SEOUL, June 14 (Yonhap) -- A group of human right experts in South Korea came out on Wednesday in support of the foreign minister-nominee whose confirmation has been delayed in the face of strong objection from opposition parties.

Ten former and incumbent ambassadors on human rights and private-sector experts issued a joint statement voicing their support for Kang Kyung-wha, saying that she has expanded the "horizon" of the country's global diplomacy and is well suited to lead the foreign ministry facing a slew of diplomatic challenges. 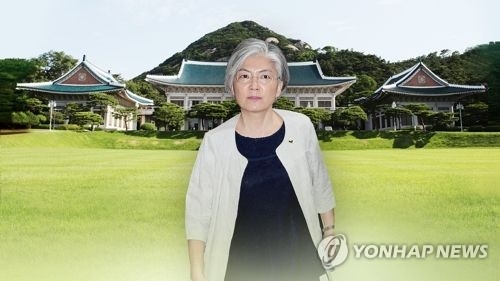 "She is the one and only diplomatic expert in South Korea who has the experience of dealing with a broad range of polices at the United Nations together with its secretary generals," the statement added.

Kang, a former U.N. official known for her years of experience in human rights and assistance policy, was tapped to lead the ministry by President Moon Jae-in last month. She went through a confirmation hearing on June 7.

Her confirmation, however, has been blocked by opposition parties arguing that she is unfit for the post due to many ethical lapses including the false registration of her residence for her daughter and real estate speculation.

The human rights experts' support is the latest in a series of similar moves aimed at saving Kang's nomination.

On Saturday, ten former top diplomats, who served as foreign ministers in past conservative and liberal governments, issued a joint statement, saying Kang is the right person to deal actively with the nation's diplomatic challenges and pending thorny issues.

If confirmed, Kang will be the first woman to lead South Korea's foreign ministry and the first case in 14 years in which the ministry is headed by a person who didn't start as a career diplomat.