Under the "export voucher" program, the Korea Trade-Investment Promotion Agency (KOTRA) has started offering a variety of services mainly to the country's smaller exporters. It said preparations for the program have been underway for the past year with the first companies benefiting from this endeavor last month.

KOTRA currently offers about 3,000 services to small and medium-sized export companies and plans to increase the number of services in 2018.

"In the past, state-run trade agencies (such as KOTRA and the Korea International Trade Association) selected a group of exporters to provide the services companies wanted," KOTRA President & Chief Executive Kim Jae-hong said in a press conference.

"But now companies can pick one of several trade agencies to seek help or support in selling their products overseas." 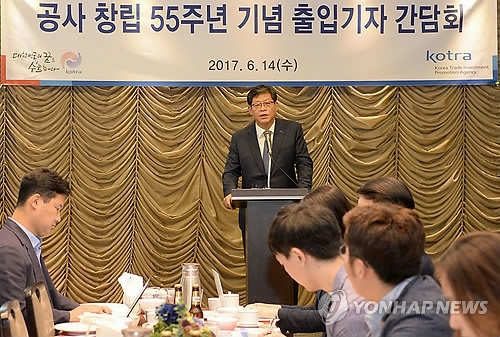 Services sought by small and midsized exporters are mainly about setting up a Web page, foreign language translation and interpretation services, and participation in an overseas exhibition, the president said.

Under the export voucher program, KOTRA plans to provide necessary and customized services to domestic exporters at very reasonable prices.

The agency, however, said there remain concerns regarding the program's effectiveness going forward.

"As KOTRA has to secure a government budget for the program, there may be a lack of cash in case of excessive requests for export-related services," Kim said.

For all of 2017, KOTRA has secured a budget of 63 billion won (US$56 million), or 35 percent of state funds worth 178.6 billion won, that has been earmarked for the export voucher program operated by state trade organizations.

If the voucher program contributes to raising exports by small and midsize companies so they account for half of all outbound shipments from the current 38 percent, such a change will help generate more than 1 million jobs in these companies.

Last year, South Korea's exports fell to $495.5 billion from $526.8 billion in 2015 due to the global economic slowdown, according to KOTRA. But exports have been on a recovery path for the seventh straight month since November helped by an upturn in oil prices and recovering global trade.