The three-day event will kick off at the Jeju International Convention Center on Friday with the theme "sustainable infrastructure" and more than 10 seminars and discussion sessions, according to the Ministry of Strategy and Finance.

AIIB President Jin Liqun and government representatives of the 77 member countries including China, India and England will attend the meeting, along with some 2,000 businessman and journalists from around the world.

South Korea's Finance Minister Kim Dong-yeon will preside over the second annual meeting of the board of governors as the host, said the ministry.

On the sidelines of the AIIB event, he will also have talks with his counterparts from Indonesia, Australia and Iran to discuss ways to enhance bilateral economic cooperation.

During the event, the ministry said one-on-one business meetings for networking in the infrastructure sector, forums on investment in developing countries, and briefings by South Korean companies will take place simultaneously.

There will also be a presentation on smart cities that introduces South Korea's green energy policy, with programs on the country's culture and food, said the ministry.

AIIB, initiated by China and officially launched in January, is a multinational institution aiming to spur Asia's economic growth through infrastructure investment. 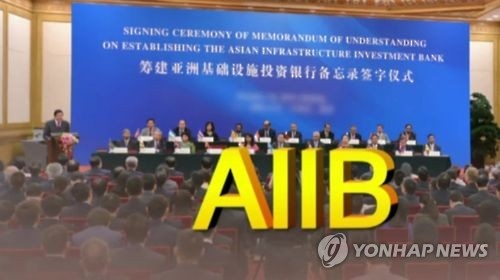 Annual AIIB meeting to be held in Jeju later this week

Annual AIIB meeting to be held in Jeju later this week