In a survey of about 1,013 judges conducted last week by the Supreme Court's Office of Court Administration (OCA), 67.82 percent said the judicial proceedings for major criminal cases can be broadcast partially or entirely on TV upon the permission of the presiding judge.

In particular, as many as 73.35 percent consented to a TV broadcast of sentencing hearings as long as the presiding judge agrees, the poll showed. 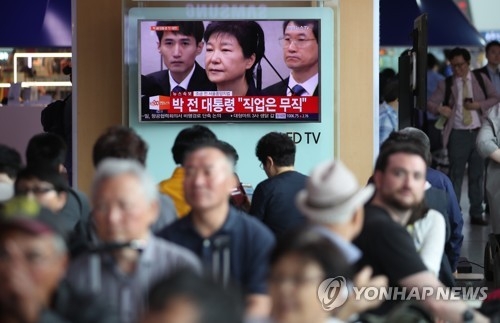 Specifically, 28.04 percent said a live broadcast of verdict hearings can be permitted only with the approval of the presiding judge, while 35.83 percent insisted that approval of the defendants is necessary. Another 34.55 percent objected to such broadcasts.

The OCA didn't mention any specific case in the latest survey but appeared to be collecting the opinions of ordinary judges amid growing public calls for live TV broadcasts of the ongoing trials of former President Park Geun-hye, her longtime friend Choi Soon-sil and Samsung Electronics Vice Chairman Lee Jae-yong.

Amid enormous public interest in their unprecedented corruption and influence-peddling scandals, there have actually been moves to lift the current ban on TV broadcasts of court hearings.

The top court introduced an online live broadcast of major cases in 2013, while the Constitutional Court posts videos of all its proceedings on its website two to three days later.

Abroad, most states in the United States, Australia, New Zealand, Britain, Italy and the International Criminal Tribunal allow broadcast transmissions in whole or in part.