If Moon "would suggest that Korea will create a buy American fund. President Trump will love it and tweet about it and he will think President Moon is his friend," said Jeffrey Jones, former chairman of the American Chamber of Commerce in South Korea.

"If he could do that, he will have a successful meeting with President Trump," Jones said in a news conference at the headquarters of the U.S. business lobby in western Seoul. 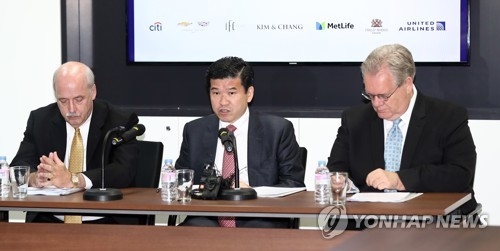 Jones made the suggestion after his recent trip to the United States along with other American and and South Korean business leaders for talks with U.S. officials in the annual "doorknock" meetings with policymakers on trade issues facing the two countries.

Trump withdrew from the U.S. from the Trans Pacific Partnership, a 12-nation free trade deal, and has stepped up attacks on the North American Free Trade Agreement.

James Kim, chairman of the American Chamber of Commerce in Korea and CEO of GM Korea, said U.S. officials are divided over the free trade deal, noting many of them are quite opposed to the deal, though a lot of them maintain positive views.