SEOUL, June 14 (Yonhap) -- North Korea said Wednesday it is willing to respond to suggestions of any dialogue and cooperation on the humanitarian front, announcing the result of a meeting with a United Nations human rights investigator.

A North Korean delegation led by Ri is currently in New York to attend the 10th meeting of state parties to the Convention on the Rights of Persons with Disabilities held from Tuesday-Thursday.

"The ambassador made it clear again the DPRK's stand ... to willingly respond to any dialogue and cooperation suggested for promoting the genuine human rights if it is to truly help the DPRK," the KCNA quoted Ri as saying in the meeting. DPRK is the acronym of North Korea's official name, Democratic People's Republic of Korea. 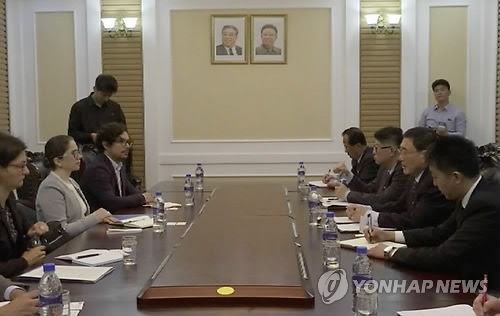 But the country will "flatly reject any human rights debate or cooperation, which is extremely politicized on the basis of testimonies made by the human scum defectors from the North and their fabrications," according to the KCNA report.

During the Monday meeting, Ri reiterated the country's will to sincerely implement the recommendations the rapporteur made during her North Korean visit, the KCNA said. The rapporteur vowed efforts to let the U.N. cooperative bodies pay attention to cooperation with North Korea for the disabled, according to the media.