"That a North Korean vehicle crossed the military demarcation line and flew into South Korean territory is a grave violation of the armistice agreement," Han told a parliamentary session. The accord halted the 1950-53 Korean War, but has left the two Koreas technically at war. 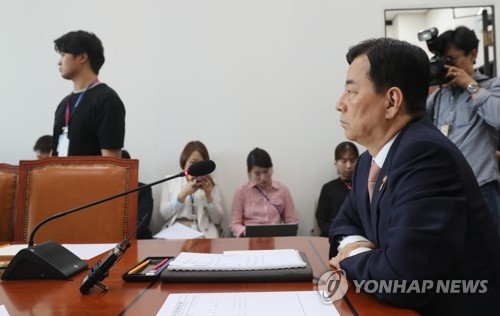 "After the end of an investigation into it, we will formally take issue with it through the UNC and demand the North take measures to address it," he added. The UNC oversees the enforcement of the armistice agreement.

Seoul's military officials said Tuesday that a suspected North Korean drone recently spied on a U.S. missile defense system rolled out in the South's southern county. A local resident discovered it on a mountain near the heavily fortified inter-Korean border last week.

"As reported by the media, (the drones) can be equipped with a firing system, or chemical and biological substances to inflict damage (on the South) at will," the minister said.

Asked if there is a possibility that the drone came from a country other than the communist neighbor, Han said its origin appears to be "certainly" -- albeit not definitively -- the North.

The minister noted that Seoul has an Israeli-made RPS-42 Tactical Air Surveillance Radar System in place to defend the airspace of the Seoul metropolitan area and plans to deploy additional radar assets to cover other regions.

Regarding the question of how he defines the North's drone activities, Han called them "spying acts."

"I see the activities as aiming to devise countermeasures after spying on our military's readiness posture," he said.