SEOUL, June 14 (Yonhap) -- South Korea will push to reopen the industrial park in North Korea only in step with progress in the resolution of its nuclear problems, the nominee for South Korea's unification minister said Wednesday.

Cho Myoung-gyon made the remarks apparently to stress that Seoul would not move hastily on the now-suspended Kaesong Industrial Complex.

Just after his nomination on Tuesday, he raised the need to resume the factory zone, inviting criticism from some that he was not prudent under the international sanctions regime.

"After taking into account North Korea's nuclear issues and other details, (we) will move forward resuming the industrial park," Cho told a group of reporters.

South Korea shut down the industrial complex in the North Korean border city of Kaesong in response to the North's nuclear and missile tests in 2016.

Back in 2004, Cho, a former presidential secretary for late liberal President Roh Moo-hyun, played a role in opening the complex, the symbol of inter-Korean reconciliation.

President Moon Jae-in earlier cast a cautious note over the hasty resumption of the complex and a joint tour program at Mount Kumgang on the North's east coast, saying that there should be progress in the resolution of North Korea's nuclear standoff. 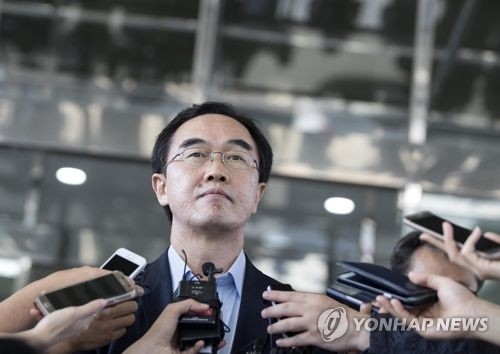