Stielike and his players returned home after losing to Qatar 3-2 in the World Cup qualifying match in Doha on Tuesday.

After dropping the latest match, South Korea remained stuck at 13 points with four wins, a draw and three losses to stay in second place in Group A. With two matches left, they're barely holding on to the final automatic qualification spot, with Uzbekistan right behind them at 12 points.

Iran have already secured their spot with 20 points. The top two teams from Groups A and B will advance directly to the 2018 World Cup in Russia. Two third-place teams must go through playoffs for their final chance.

After the loss to the heavy underdogs, the call for Stielike's head, which began as far back as last fall, has intensified even further. The Korea Football Association (KFA) on Thursday will hold a technical committee meeting, where it's expected to dismiss him.

The German-born coach said he'll accept any decision by the KFA. 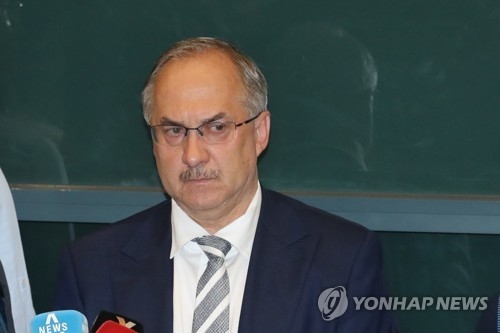 "I believe coaches must always take responsibility for all results, good or bad," he told reporters at Incheon International Airport. "I fully understand we've not been playing well of late, and I think I have to take the fall for that. I am well aware of the criticism on our team."

Moments after Stielike's interview, Lee Yong-soo, head of the technical committee, said he believed it was "time for a change," hinting at Stielike's dismissal.

Pressed on whether he'd step down himself before the KFA made the call, Stielike said he'll only accept the KFA's decision.

"I haven't really thought about that," Stielike said of a possible resignation. "I've only been thinking about playing well in the next two matches."

Stielike said he was at least content that South Korea haven't dropped in the standings despite the loss, and that he hoped South Korea will finish the qualification round on a stronger note -- no matter who the bench boss will be.

"I think South Korea should play the remaining two matches as well as they can to qualify for the World Cup," he said. "Whether I will be the head coach or someone else will be on the bench is of secondary importance."

Stielike took over the team in September 2014 and is the longest-tenured coach for the men's team.