In the fifth Seoul-New Delhi finance ministers' meeting held at a Seoul hotel, South Korea's Kim Dong-yeon and his Indian counterpart Arun Jaitley shared their ideas on economic cooperation, touching on topics from the macroeconomic situation to investment programs, according to the Ministry of Strategy and Finance.

This was Kim's first meeting with a foreign minister since he officially took office last Friday.

The finance ministry said the two ministers signed a deal to manage the US$1 billion package through the Economic Development Cooperation Fund (EDCF), while their export-import banks inked a memorandum of understanding for an export credit of US$9 billion. They also selected India's four infrastructure development projects -- which include smart cities and railway construction -- where those funds will be used.

The two finance ministers also agreed to help each other in improving the business environment for private enterprises and utilizing South Korea's Knowledge Sharing Program (KSP) initiated in 2004 to offer its growth experience and other expertise to other countries.

They also decided to hold bilateral talks for working-level officials at least once a year in a bid to handle economic cooperation issues efficiently.

India is South Korea's eighth largest export market with the total reaching US$11.6 billion in 2016. 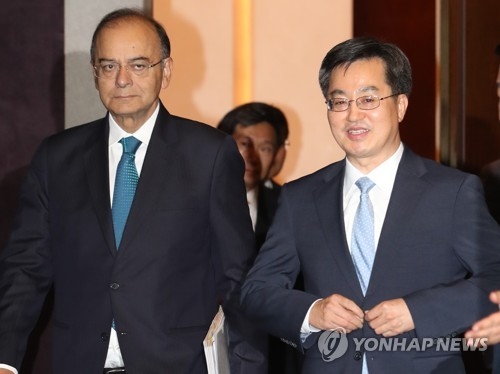