Son was forced to leave the game with a broken right forearm in South Korea's 3-2 loss to Qatar in the final Asian qualifying round for the 2018 FIFA World Cup in Doha on Tuesday. With the Taeguk Warriors trailing 1-0, Son got up in the air to battle defender Mohammed Musa for the ball in the 30th minute but landed awkwardly on his right arm. He stayed down on the pitch for a few minutes in visible pain before walking off the field with the medical staff's help.

Son, who started as a left winger, was seen holding his right wrist, and was eventually replaced by Lee Keun-ho.

The former Bayer Leverkusen player landed in his homeland earlier Wednesday with a cast on his right arm and was immediately transfered to a hospital in Seoul for further examination.

An official with the Korea Football Association (KFA) said doctors told Son surgery was "inevitable," adding that the 25-year-old forward will discuss with the national team doctors and other KFA officials to decide when and where he should have surgery. Son is expected to sit out for at least four weeks for a full recovery.

Son, coming off a 21-goal season for the London club, is one of South Korea's most dangerous offensive players. He has 17 goals in 55 international matches. 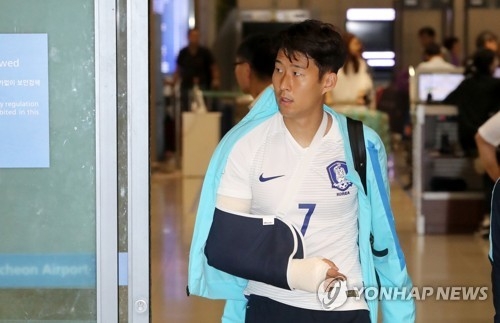