WASHINGTON, June 14 (Yonhap) -- The comatose American college student released from North Korea must have gone through "horrendous mistreatment" in the communist nation, the Washington Post said Wednesday, calling for stronger sanctions on Pyongyang.

University of Virginia student Otto Warmbier, 22, returned to his Ohio home in a coma after spending 17 months in the North on charges of stealing a political propaganda poster from a hotel. North Korean officials claimed Warmbier fell into a coma in March last year due to "botulism" food poisoning.

"He was arrested, tried on spurious charges and evidently subjected to horrendous mistreatment by North Korean authorities. This was outrageous behavior even by the standards of one of the world's most vicious and isolated regimes. It should not go unpunished," the paper said in an editorial.

It also said that what happened to Warmbier is the result of "North Korea's odious practice of seizing Americans to use as political pawns." President Donald Trump should make it a priority to win the release of three other Americans detained in the North, the editorial said.

"The United States should also move quickly to step up sanctions on the regime of Kim Jong-un, which has been racing to develop missiles that can reach the United States with a nuclear warhead," it said. 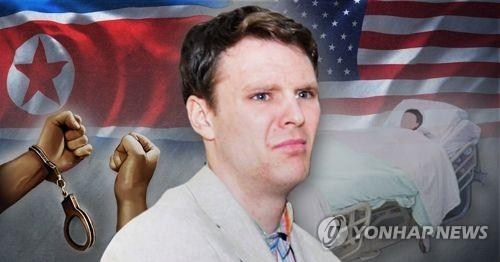 Washington Post: Warmbier must have gone through 'horrendous mistreatment' in N. Korea

Washington Post: Warmbier must have gone through 'horrendous mistreatment' in N. Korea