K-Bank, which was launched April 3, has attracted 520 billion won (US$464 million) in deposits while extending 480 billion won in loans, exceeding the combined full-year target of 900 billion won.

The pace of growth in K-Bank's deposits and loans is much faster than expected. At the time of its launch, K-Bank aimed to lure deposits of 500 billion won for all of 2017, with the lending target set at 400 billion won.

Industry watchers attributed K-Bank's stellar performance to the ubiquity of smartphones and its more favorable rates than offline lenders.

K-Bank allows people to open accounts around the clock using their smartphones. It also gives customers higher deposit rates than those offered by traditional banks.

The number of customers at K-Bank has surpassed the 300,000 mark. The bank was established by a consortium of telecom giant KT Corp., Woori Bank and 19 other companies.

Another Internet bank, Kakao Bank, is expected to set sail in late June. 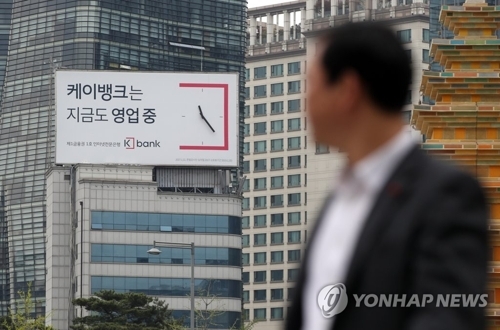