The two-day training is part of efforts to defend Dokdo from the possible aggression of "outside forces," the Navy announced.

It was apparently referring to Japan, which claims sovereignty over the Seoul-controlled islets in the East Sea.

This week's drill involves the 3,200-ton Gwanggaeto the Great-class destroyer and six other ships of the Navy and the Coast Guard, plus four naval and Air Force aircraft, including an F-15K fighter jet and a P-3C Orion patrol plane.

A unit of marines is also staging a landing drill on Dokdo. 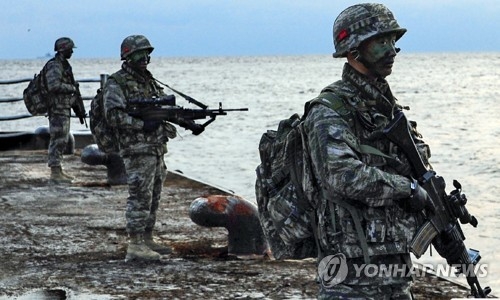 "The training this time has no major difference from previous ones. It's taking place at a similar level (in terms of its scale)," Cdr. Jang Wook, the Navy's spokesman, told reporters.

The Dokdo defense exercise is a regular event held twice a year since 1986, based on the scenario of an external threat. The ongoing drill is the first since the launch of the Moon Jae-in administration. 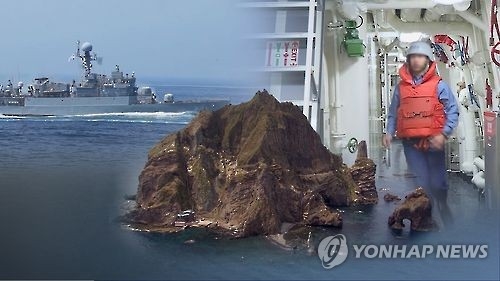 The Japanese government immediately lodged a protest with South Korea, according to the Kyodo news service.

"It is unacceptable... extremely regrettable in light of our country's stance" regarding the sovereignty of the islets, Kenji Kanasugi, director general of the Foreign Ministry's Asian and Oceanian Affairs Bureau, was quoted as telling a senior diplomat at the South Korean Embassy in Tokyo.

In response, the South Korean Navy official pointed out that Dokdo is South Korea's territory.

"It's natural (for us) to conduct the drills since it's a regular one aimed at defending our territory," Jang said.

The Dokdo issue is a key source of longstanding diplomatic stand-offs between the neighboring countries along with Japan's wartime atrocities.

Seoul and Tokyo have been at odds over a controversial deal on the "comfort women," a euphemism for Korean women forced to serve as sex slaves by Japanese troops during World War II.

Moon, a liberal leader who was a human rights lawyer, stressed that many South Koreans still disapprove of the 2015 accord to settle the decades-old historic issue with Japan's payment of 1 billion yen (US$9 million) for dozens of victims who are still alive.

Koreans believe Japan has yet to fully atone for its wartime atrocity.