(ATTN: RECASTS paras 2-3 to verify new vice minister for oceans and fisheries was not present to receive his letter of appointment; REPLACES photo)

SEOUL, June 15 (Yonhap) -- President Moon Jae-in presented each of his new vice ministers and officials of similar status with a letter of appointment Thursday, marking what could be seen as an official launch of his new administration.

A total of 27 new ministers and vice ministerial-level officials were officially appointed in a ceremony at the presidential office Cheong Wa Dae.

The president named the new vice minister for oceans and fisheries, Kang Joon-suk, earlier Thursday, but he was not available for the ceremony that also involved the new government officials' spouses, Cheong Wa Dae officials said. 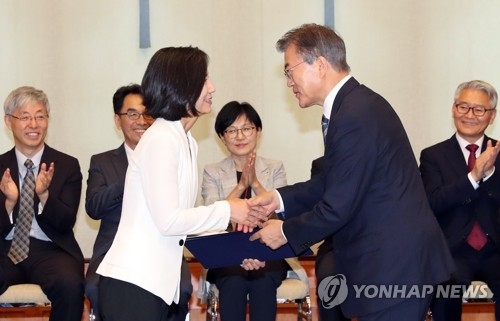 Thursday's ceremony came amid an ongoing dispute over some of the president's picks for new ministers, including Foreign Minister-nominee Kang Kyung-wha.