SEOUL, June 15 (Yonhap) -- President Moon Jae-in urged the opposition parties Thursday to again consider his nominee for new foreign minister and give their blessing, saying that is what the people want and that he is ready to do what people want.

"I will follow the people's command. I ask the opposition parties to also respect what the people wish," the president said in a weekly meeting with his top secretaries.

Moon's remarks came after the opposition-led parliament missed its Wednesday deadline to issue a report on the outcome of a confirmation hearing for Foreign Minister nominee Kang Kyung-wha, which took place last week. 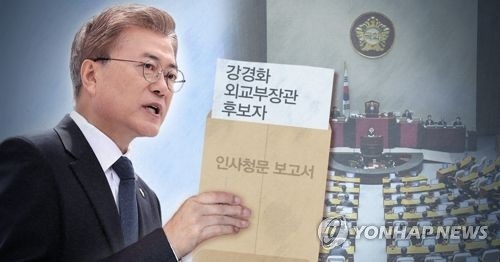 The president asked the parliament to try again and issue a report, as required by law.

However, he apparently offered his ultimatum as well.

"In the past, confirmation hearings for new ministers did not even exist. It is the opposition's role to thoroughly check and verify a nominee during a confirmation hearing. But the final decision based on the outcome of such a hearing is for the people to make. The president, I believe, has a chance to once again look back on the nomination based on the people's decision," the president said.

"Kang is a confident and great woman," he said. "She has been recognized and praised for her abilities as a diplomat in the United Nations and the international community. As they say, she is a global figure. I believe it is about time we had such a global figure as our foreign minister." 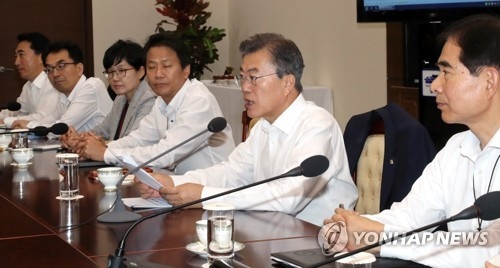 Kim was appointed Wednesday after the parliament missed the second deadline.

"Now there are only about 15 days left until the Korea-U.S. summit, with the G-20 summit and a series of other meetings with other heads of state also waiting to be held," President Moon told his secretaries, according to pool reports. "How can a president be ready without a foreign minister."

The main opposition Liberty Korea Party (LKP) has threatened to boycott the ongoing parliamentary session should the president appoint Kang or other new ministers without the parliament's endorsement.

Moon insisted his government was trying harder than any other administration did to work with opposition parties.

"I believe the opposition parties' objections against the foreign minister nominee are surely possible in our politics. But I really cannot understand them saying that there will be no more cooperation or that they will boycott the parliamentary session if the president will appoint her despite their objections," he said, noting government ministers did not require parliamentary approval for their appointment.

Chung Woo-taik, the LKP floor leader, criticized what he calls the president's "unilateral" appointment style, warning that his party will join forces with other opposition forces to resist it.

"I am concerned that (Kang's) appointment will, after all, make it even more difficult (for the president) to properly manage pending state issues (that need to be dealt with together with parliament)," Chung told reporters.

Park Joo-sun, the interim leader of the People's Party, also upbraided Moon for moving to break "cooperative governance," a political parlance referring to the ruling camp's efforts to mend fences with opposition parties that lead the legislature.

"How can the parliament work properly when the president and ruling party have destroyed the mood for cooperative governance?" Park said in a radio interview.