Vice Unification Minister Chun Hae-sung made the remark in his meeting with Thomas Shannon, undersecretary of state for political affairs, in Seoul to exchange views about North Korea, according to the Ministry of Unification.

The two sides shared the view that resolving North Korea's nuclear problems is the top priority, the ministry said. They also raised the need to maintain the ironclad Seoul-Washington alliance when the South carries out its North Korea policy.

"The vice minister said that South Korea plans to seek (to improve) inter-Korean relations with close cooperation with the U.S.," the ministry said.

Shannon arrived in Seoul on Tuesday for a four-day visit to prepare for a summit between President Moon Jae-in and his U.S. counterpart Donald Trump in late June.

The summit comes as North Korea is advancing its nuclear and missile programs at an alarming pace, with the goal of developing an intercontinental ballistic missile capable of hitting the U.S. 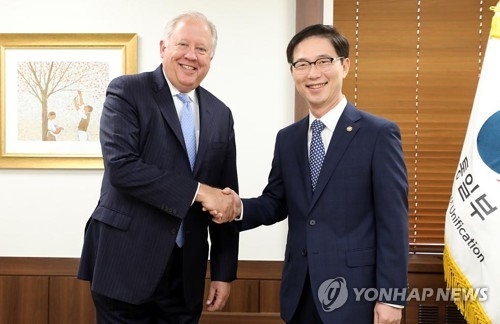