Curtis Melvin, a researcher at the U.S.-Korea Institute at Johns Hopkins SAIS, discovered the new structure in imagery of the villa taken on April 2, according to Washington-based Radio Free Asia (RFA).

The helipad, which appeared new, was built near a yacht dock and hall inside the villa compound in South Pyongan Province, northwestern North Korea, it said.

"The new helipad appears to have been built not for Kim Jong-un, but for his family," RFA's Korean language edition quoted Melvin as saying. "It could also be used by people who visit Kim Jong-un by helicopter during his stays at the villa. Or it could be for other privileged classes." 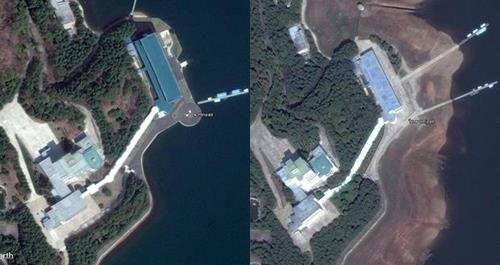 Kim has built nine private runways since taking power in 2011 upon the death of his father and late leader Kim Jong-il, according to RFA. Given his penchant for planes, the young leader in his early 30s is expected to construct more runways and helipads for the exclusive use of him and the ruling elite, it said.

"Because of this, there continues to be criticism that a huge amount of labor and capital that have nothing to do with the North Korean people's lives is being wasted," it noted.

The manmade lake is also near the site where North Korea launched a newly developed medium-range ballistic missile called the Pukguksong-2 last month.