SEOUL, June 15 (Yonhap) -- In February, the much anticipated historical action film "The Battleship Island" rose to the media spotlight in Japan even before its completion when a conservative daily criticized it for "distorting" common history between the two countries.

The blockbuster depicts Koreans' desperate attempt to escape coal mines on Japan's Hashima Island where they were forced to work during World War II, when Korea was a colony of Japan. The film stars A-list actors Hwang Jung-min, So Ji-sub and Song Joong-ki, and actress Lee Jung-hyun.

The Sankei Shimbun newspaper, however, then angered Koreans by claiming that the film's description of Hashima as a "hell island" and the forced labor of Korean teenage boys there are far from the truth, quoting a Korean-Japanese university professor.

"The film is a fact-based fiction," the film's director Ryoo Seung-wan said during a news conference Thursday for the movie set to open next month. 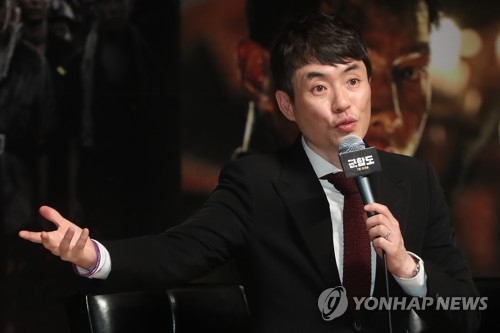 "Many Koreans were forced into labor after an order to mobilize all Koreans was in place, and they didn't get their due wages and humane treatment. These are facts as far as I've studied. There are records backing them up and surviving victims. And it also is a fact that they had to go up to 1,000 meters below sea level to unearth coal."

According to a South Korean government report released in 2012, about 500 to 800 Korean are believed to be put to work in cramped and stifling spaces at undersea coal mines on the island off the coast of Nagasaki between 1943 to 1945 and 143 of them died there of diseases, malnutrition and accidents. The island is known in English as Battleship Island for its silhouette resembling a destroyer. 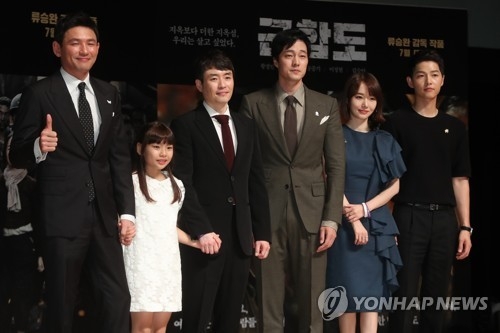 The writer-director best known for "Veteran" (2015) said he tried to portray the historical background and spatial settings as close to reality as possible, but the dramatic story of the massive escape and the life story of each character came from his own imagination.

Questioned by a Japanese reporter about if the film would affect South Korea-Japan relations when it is unveiled, Ryoo answered: "I'm a person who wishes that relations will improve. ... But it's important to deal with problems and solve them, if there are any."

He said once the film is revealed, the current Japanese concerns over the film would disappear because it is not a kind of movie intended to instigate anti-Japanese or nationalistic sentiment.

"This is a film about the attitudes and minds that any ordinary man can have or more fundamentally about the mankind and war," he stressed. "It shows how war can make man a monster."