SEOUL, June 15 (Yonhap) -- South Korea condemned Thursday the Japanese government's recent order to its foreign missions to report maps with markings of Dokdo, the Korean name of the islets to which the country lays territorial claim.

Japan's Kyodo News reported last week that the government posted messages on the websites of its 70-something overseas diplomatic missions, urging readers to report to the embassies if they see any maps or publications in which the islets are named Dokdo or its surrounding waters as the East Sea, the Korean name of the waters between South Korea and Japan. 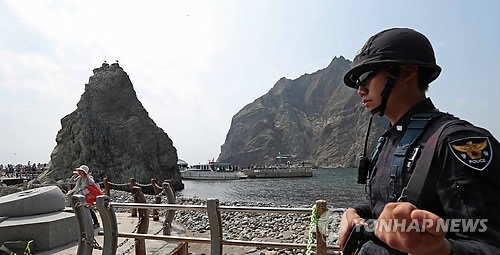 It is part of Japan's repeated territorial claim to the South Korean islets as well as a move to fight South Korea's diplomatic efforts to have the East Sea internationally recognized as the official name of the sea called the Sea of Japan by Tokyo.

"Dokdo is clearly part of our territory in terms of history, geography and international law, and any provocation from Japan in that regard will not be tolerated," Cho June-hyuck, spokesman at the South Korean Ministry of Foreign Affairs, said in a press briefing.

"Our government is also continuing efforts for broader international recognition of the name East Sea which our race has used for more than 2,000 years," he noted.

"The government has already started to respond to Japan's such moves," he said, vowing collaboration with local and foreign institutions to fight the Japanese actions.