SEOUL, June 15 (Yonhap) -- With the number of people living with pets on the rise, South Korea's many regional governments have been jumping on the bandwagon of the pet industry to meet increasing demand for facilities and accommodations for pet use.

Many pet owners have called for the expansion of social infrastructure tailored for their pets, including pet hotels, so that they could spend their time or travel with them.

According to the government's data, pets are raised in more than 20 percent of the country's households, or about 4.5 million.

The increasing demand for pet-related industry is prompting many local governments to enter the fray.

The North Chungcheong regional government in central South Korea has come up with a report from a study on the establishment of a theme park for pets to be healed as part of efforts to draw more tourists to Suanbo, a once-famous hot spring village in the city of Chungju.

The report calls for the injection of 4.3 billion won (about US$3.83 million) into the construction of the park including a camping area equipped with a pet playground and guest rooms where pets and their owners can sleep together.

Also included in the report is the construction of an academy for pets to receive beauty and health care. 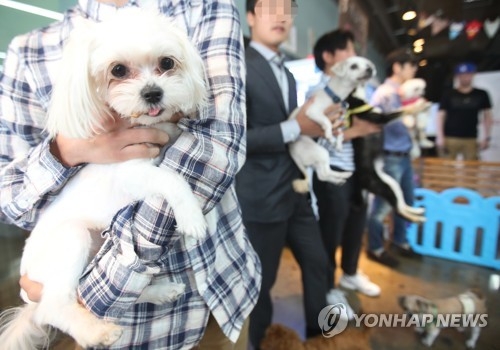 In March, the Gyeonggi provincial government near Seoul singled out a preferred bidder for a license to build a theme park for pets, advancing closer to the pet industry.

Under the project, the local government plans to establish the theme park on a site of 165,000 square meters in the city of Yeoju, southern Gyeonggi Province, at an investment of 35.8 billion won. The park is projected to have facilities for pets to be adopted and a training school for pet experts.

If the license is formally given to the successful bidder, the private company is required to invest 35 billion won in building a park for pets, a pet hotel and a shopping mall offering goods for pets.

The city of Ulsan on South Korea's southeastern coast finished the construction design in April for a cultural center for pets on a site of 13,000 square meters. Construction of the center, for which the city government will foot the bill of 9 billion won, is scheduled to begin in August for completion in August next year.

The facility, if it opens, will have an area for pet owners to take their pets on walks and play with them, and a facility for treating pets.

Officials at the Jeongeup municipal government in the country's southwestern region have drawn up a plan to build a livestock theme park at an investment of 11.3 billion won by the second half of next year. The theme park, whose construction is slated to begin next month, will stand on a site of 60,000 square meters at the foot of Mount Naejang, one of the country's top tourist spots to relish autumn tints, with a playground and cafe for pets established.

A service station for pets made a debut for the first time in the country in April. The service station along an expressway in the town of Imsil also on the country's southwestern region opened the Pet Theme Park where travelers are allowed to eat and rest together with their pets.

The popularity of the theme park has been bouncing as it has a restaurant offering gadgets for pets to drink water and defecate, among others.

Meanwhile, one regional government after another has been holding a festival on pets. The South Gyeongsang provincial government staged a three-day exposition from June 2 to showcase pet fodder, home-made snacks for them, medical equipment and furniture for them.

In May, the municipalities of Uijeongbu, north of Seoul, held a festival in which pet owners and their pets took part in a variety of programs including a run. In the southeastern city of Daegu, a pet show which was put on from May 27-28 brought together 100 domestic and foreign vendors to display pet-related goods and services.

The municipality in Jindo, a town in South Korea's southwestern province of South Jeolla, held a festival on Jindo dogs, one of three distinct indigenous Korean dog breeds along with Sapsal and Pungsan dogs.

"In case the pet industry is activated, an increase in the number of tourists can give a boost to the rejuvenation of regional economies," he added. 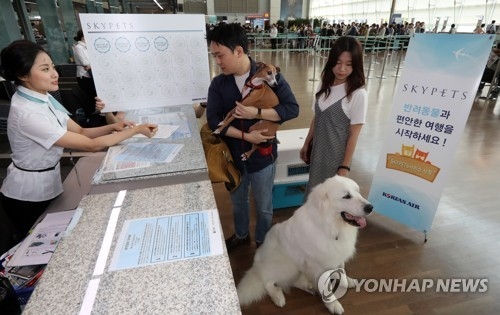