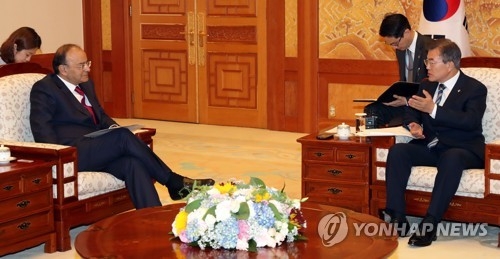 "I am very pleased to see that our two countries are so actively exchanging ranking officials, and I believe that shows how fast our countries' bilateral relationship is developing," Moon told the Indian minister.

The president noted his special envoy to India Chung Dong-chea also embarked on a trip to India and Australia earlier in the day.

"The Prime Minister has appreciated your decision to send a special envoy to India for conveying your best wishes and carrying this relationship further," he said.

"Your initiative in doing so fits with India's policy of looking towards the East and consolidating our relations with the Republic of Korea and with a lot of other Eastern neighbors that we have," Jaitley said.

"We believe that an internationally-minded Korea is good for both Asia and good for other nations," he added.

India Prime Minister Modi made many South Korean friends, apparently including the South Korean president, when he posted congratulatory messages, written in Korean, for Moon on his social network service accounts.

Moon again thanked the Indian leader for his messages.

Moon and Modi held a telephone conversation shortly after Moon's inauguration on May 10.