WASHINGTON, June 15 (Yonhap) -- A comatose American college student released from North Korea this week has severe brain damage and is in a state of "unresponsive wakefulness," a doctor was quoted as saying Thursday.

Otto Warmbier, the 22-year-old University of Virginia student, returned to his Ohio home in a coma earlier this week after spending 17 months in the North on charges of stealing a political propaganda poster. North Korean officials claimed Warmbier fell into a coma in March last year due to botulism and a sleeping pill.

"He has spontaneous eye opening and blinking," said Dr. Daniel Kanter, director of neurocritical care for the University of Cincinnati Health system, according to AP. "However, he shows no signs of understanding language, responding to verbal commands or awareness of his surroundings. He has not spoken."

Earlier in the day, Warmbier's father said that his son was "brutalized and terrorized" in the communist nation, and he doesn't believe Pyongyang's account of what happened to the son.

"What I would say to the North Korean regime, I would say I'm so proud of Otto, my son, who has been in a pariah regime for the last 18 months, brutalized and terrorized, and he's now home with his family," Fred Warmbier said at a news conference at Wyoming High School in Cincinnati, Ohio, where his son graduated.

He said he doesn't believe "anything they (the North Koreans) say."

"Even if you believe their explanation of botulism and a sleeping pill causing the coma -- and we don't -- there is no excuse for any civilized nation to have kept his condition secret and denied him top notch medical care for so long," he said.

The New York Times cited an unidentified senior American official as saying that Warmbier was "was singled out for particularly brutal beatings while in captivity."

"There's no excuse for the way the North Koreans treated our son," said Fred Warmbier, who was wearing the same jacket his son wore in Pyongyang in March last year when he appeared on TV and confessed to his "crimes" and begged for forgiveness. 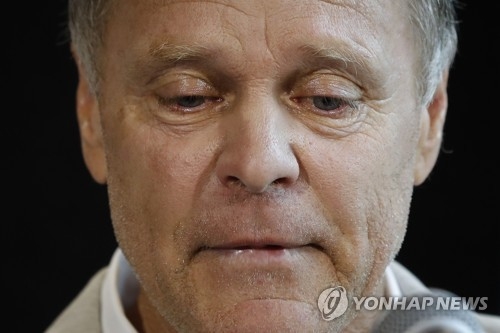