SEOUL, June 16 (Yonhap) -- South Korean tech giants are seeking to bolster their after-sales services in the United States to appeal to consumers and narrow the gap with their archrival Apple Inc., industry sources said Friday.

Samsung Electronics Co. has been providing what it calls "premium care" services in the U.S., allowing users to receive various services for monthly pay of US$11.99, along with on-site visits by tech experts.

While Samsung earlier planned to release similar services in South Korea as well, the plan was postponed because of the need for further preparations.

LG Electronics Inc. also decided to expand free warranty services to U.S. customers for two years from one year. The policy will also apply to those who previously purchased the flagship G6 smartphone.

Industry watchers said the latest steps came as the companies plan to release new products around the launch of a new iPhone by Apple.

While Samsung stands as the No. 1 player in the global market in the smartphone sector, it has been trailing Apple in the U.S. market.

According to the data compiled by Strategy Analytics, Apple took up 34.5 percent of the U.S. market in the first quarter, followed by Samsung with 24.6 percent. LG took up 20 percent, standing as the third player, while China-based ZTE managed to take up 6.9 percent. 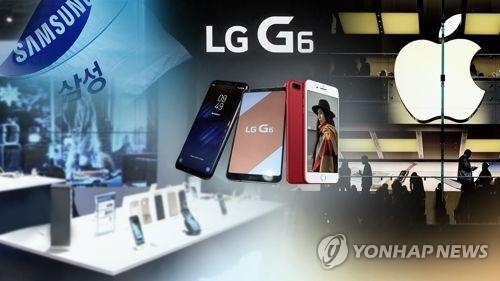