SEOUL, June 16 (Yonhap) -- China has blacklisted 24 South Korean manufacturers and exporters, and restricted the sale of their cosmetics and food products in the world's No. 2 economy, a local trade promotion association said Friday.

The revelation of the list by the Korea International Trade Association (KITA) is a fresh blow to local companies already hurt by Chinese economic retaliation over the deployment of a U.S. anti-missile system on the Korean Peninsula.

China has for the past months banned imports of a number of South Korean goods, and effectively forced most of the 99 stores of Lotte Mart, the discount outlet chain of Lotte Group, operating in China to close, by citing violations of safety regulations.

The blacklisted South Korean companies include 14 manufacturers and 10 exporters of South Korean food items and cosmetics, KITA said. It cited statistics from the General Administration of Quality Supervision, Inspection and Quarantine of China.

The South Korean firms are among 414 foreign and 217 Chinese companies also put on the same list.

The Chinese agency has blacklisted domestic and foreign companies that have been either denied customs clearance at least once or were found to have brought in low quality products into the country more than once in the past three years.

The listed companies are required to present certificates of additional quality inspection before they are allowed to ship goods to China. 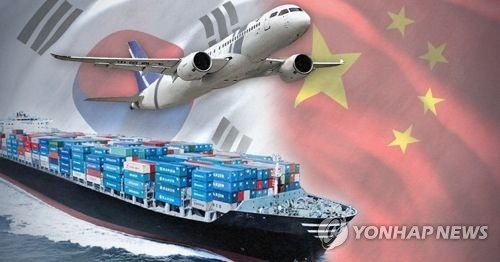