SEOUL, June 16 (Yonhap) -- South Korean baseball slugger Choi Jeong is no longer afraid of swinging with two strikes, which in turn has put him on a torrid home run pace this season.

Choi, who tied for the league lead last year with 40, is on pace for 52 home runs, which would make him just the fourth KBO player to surpass the half-century mark in long balls in one season. 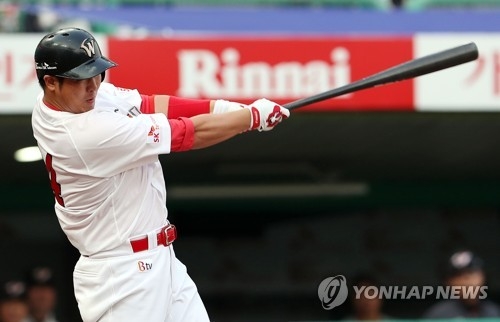 "I can't afford to relax, because sometimes you can play an entire month without hitting one out of the park," Choi said. "If I can match last year's production, I'd be satisfied. But you have to play the entire season, and I have to overcome slumps that will surely come at some point this season."

Choi said he has become much more aggressive at the plate than last year, and numbers bear that out.

He's taking more swings with two strikes, and a few of them have led to home runs.

"I don't necessarily step up to the plate trying to hit a home run," Choi said. "But I also don't shorten my swing just because I have two strikes."

Led by Choi, the Wyverns are by far the best home run-hitting team in the league in 2017. They're the only club with four hitters ranked inside the top 10 in home runs -- behind Choi are Han Dong-min with 21 (second), Kim Dong-yub with 13 (tied for sixth) and Jamie Romak with 12 (tied for eighth) -- and the Wyverns lead all clubs with 111 home runs.

The Doosan Bears are a distant second with 70 home runs. Choi, Han, Kim and Romak have combined for 68, five more than the third-ranked Lotte Giants.