The 24-year-old South Korean went under the knife to treat a fractured forearm at a Seoul hospital, an official with the Korea Football Association (KFA) said. He sustained the injury during the 2018 FIFA World Cup qualifying match against Qatar at Jassim Bin Hamad Stadium in Doha on Tuesday.

The surgery, which took about an hour, was successfully completed, and the footballer will be hospitalized one or two days before returning home.

Son was forced to leave the game early in South Korea's 3-2 loss to Qatar in the final Asian qualifying round for the 2018 FIFA World Cup. With the national team trailing 1-0, Son got up in the air to battle defender Mohammed Musa for the ball in the 30th minute but landed awkwardly on his right arm. He stayed down on the pitch for a few minutes in visible pain before walking off the field with the medical staff's help.

Son returned home on Wednesday with a cast on his right arm and was immediately transferred to a hospital in Seoul for further examination.

Son is expected to sit out for at least four weeks and his full recovery could take up to 12 weeks, according to doctors here.

Son is certain to miss the Spurs' preseason matches in the United States next month and is likely to be sidelined at the start of a new EPL season. The London club, last season's runners-up, will open their 2017-18 EPL season with Newcastle United on Aug. 12.

In the final round, South Korea are sitting at 13 points with four wins, a draw and three losses to stay in second place in Group A. They're barely holding on to the final automatic qualification spot, with Uzbekistan only one point back.

In the Asian qualifying, the top two from each of the two groups will advance directly to the 2018 World Cup in Russia. Two third-place teams must go through playoffs for their final chance.

Son will play under a new head coach once he returns to the national team. The KFA on Thursday sacked Uli Stielike for poor World Cup qualifying performances. 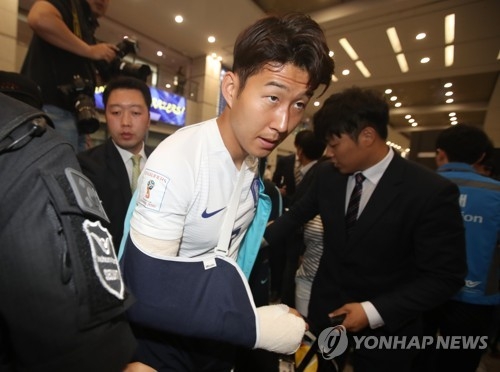