"Today, the world is directing its attention to the dynamics in Asia. Asia accounts for 60 percent of the global population and more than one-third of global gross domestic product," Moon said in his congratulatory remarks marking the start of a three-day annual meeting of the Asian Infrastructure Investment Bank (AIIB) on South Korea's southern resort island of Jeju.

"It is the world's largest market and also an important production facility. At the same time, it is a region with great potential to lead the global economy," he added, according to a script of his speech released by the presidential office Cheong Wa Dae.

South Korea is a key member of the AIIB, currently headed by China's Jin Liqun. This week's meeting on the South Korean island marks the second annual meeting of the regional bank, launched in 2016.

The AIIB meeting marked the first international meeting attended by the new South Korean president since his inauguration May 10. 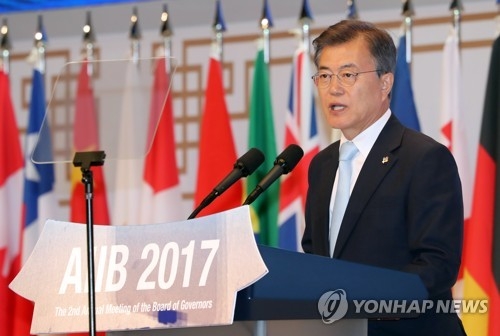 Moon said the bank has already helped developing countries in the region a great deal, noting the bank has financed US$2.5 billion for 16 development projects in such countries.

The South Korean president said the direction of the bank's investment conformed with that of his country's own development plan.

First, new investment in infrastructure must contribute to sustainable growth, he insisted.

"Up until now, infrastructure investments have contributed to the economic growth of each country, but they have sometimes damaged the environment in the process," Moon said.

"Development that destroys the environment is bound to come back as a greater cost in the future. Environmental issues affect not only the host country but also other surrounding countries. That is why environmentally friendly development and cooperation between countries are so important," he added. 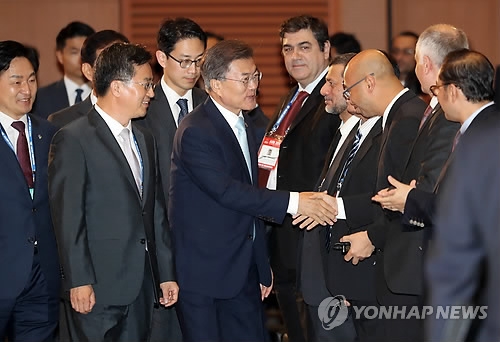 The president said his country will do what it can, revealing a plan to boost the proportion of power supplies from clean and renewable energy sources in South Korea to 20 percent of the total by 2030.

The new South Korean president has announced plans to shut down aged nuclear reactors and coal-fired power plants as a way of creating a safe environment and reduce greenhouse gas emissions, but it marked the first time he revealed how he apparently planned to make up for the loss in power supplies.

"(I) plan to reduce coal-fired power plants and move towards a country free of nuclear power plants. We will actively share with other AIIB member nations our experience in building 'sustainable infrastructure,' such as renewable energy sources and environmentally friendly energy towns," Moon told the meeting.

"For sustainable development, all members in a society must grow together. Investment in new infrastructure must ensure balanced development that narrows the gap between countries and regions," Moon added.

Lastly, new investments must lead to new jobs, he said.

"Not just South Korea but the entire world faces a problem of growth without employment, lack of jobs for the youth," he noted.

"South Korea realized both economic development and democratization, rising from the ashes of war in just half a century. It also is the world's first country to have become a donor nation from a recipient of international aid," Moon said.

"From now on, South Korea will be a partner that will accompany Asia's developing nations in their journey to make economic and social developments," he said. "We promise to fulfill our role and responsibility as a bridge between developing and developed nations."

The South Korean president also asked member countries of the AIIB to help open up North Korea to the rest of the world.

"The Korean Peninsula lies at the far eastern end of the Asian continent. When the South and the North are again connected by railways, the new Silk Road will be completed," he said.

"Most of all, I wish that peace on the peninsula will contribute to Asia's peace and integration. I ask you to also be part of such efforts," he said.

The AIIB currently has 77 member countries, including 20 non-Asian member nations, according to Moon.