According to a poll by Gallup Korea, 83 percent of Koreans held a positive view of his performance as the country's leader, up 1 percentage point from the previous survey last week. Only 10 percent disapproved while 7 percent did not answer.

The poll was conducted on 1,003 adults from Tuesday to Thursday, with a margin of error of plus or minus 3.1 percentage points.

Moon became the president by winning a May 9 snap election, following the ouster of former President Park Geun-hye over an influence-peddling scandal.

"Despite the mounting pressure from opposition parties over his nominations of ministers, his rating remained at the highest level for all presidents," Gallup noted.

Many respondents cited Moon's efforts toward better communication with the public and job creation as main reasons for the positive assessment.

The controversies over his minister nominees and the deployment of a U.S. missile defense system were mentioned as negative factors.

The poll also gauged the public sentiment regarding the disputed deployment of THAAD to the Korean Peninsula. Fifty-three percent of the respondents approved of THAAD, while 32 percent disapproved. In a January survey, 51 percent approved with 40 percent against the anti-missile unit.

The drop in the disapproval rating came as North Korea has continued to raise cross-border tensions. Pyongyang has carried out a total of five missile provocations since Moon took office on May 10. 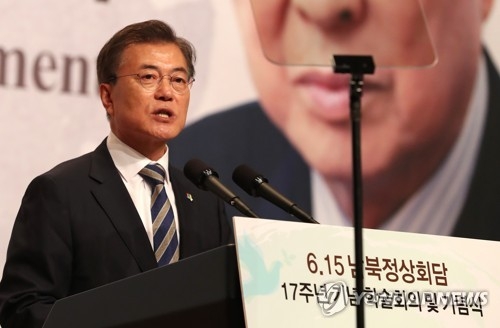