HAMYANG, South Korea, June 16 (Yonhap) -- A man diagnosed with a mental illness died after police shot him with a stun gun while attempting to take him to a mental hospital, police said Friday.

Police in the southeastern city of Hamyang said that the 43-year-old man's mother called them at 6:19 p.m. on Thursday seeking help with her son, who was resisting being taken to a mental hospital and wielded a shovel and a sickle in a rampage at their house.

After arriving at the scene, one of five police officers shot a Taser at him during the confrontation but the shot went wide of the mark. 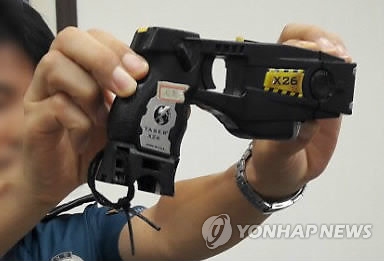 Another officer, who was 3 meters away from the man, used a Taser on him as he was acting violently and combative with officers, police said. He fell down after being shot in his right side and right arm and was handcuffed.

Police then had to perform cardiopulmonary resuscitation after the man stopped breathing. He was pronounced dead around 8:20 p.m. after being treated at a nearby hospital.

The man was confirmed to have a record of stays at mental hospitals due to a diagnosis of schizophrenia. His parents were attempting to have him admitted again as his condition worsened due to his refusal to take medication.

At the scene, there were three officials present from a mental hospital located in the neighboring city of Jinju.

The police said they will conduct an autopsy to find out whether the Taser led to his death. Incidents of death caused by Tasers have been reported many times in foreign countries but there have been no such cases reported in South Korea.

The Hamyang Police Station expressed its condolences over the man's death and promised to investigate whether the officers' handling of the situation was appropriate.

Under a law on police execution of their duties, police are allowed to use Taser guns with a maximum range of 6.5 meters and an electric current of 2.1 milliamperes when it is necessary to protect others or to restrain people resisting their execution of duties. However, they are prohibited from aiming stun gun’s at the target's face, heart and genitals.