Lee Cheol-woo of the main opposition Liberty Korea Party, who chairs the parliament's intelligence committee, made the remarks a day after he was briefed by the National Intelligence Service on the latest drone incursion.

"In my view, (the drone) was sent here to check the angle of the THAAD (Terminal High-Altitude Area Defense) system," Lee told reporters, referring to the missile interception system in Seongju, some 290 kilometers southeast of Seoul.

Seoul's military officials said Tuesday that a suspected North Korean drone recently spied on the site of the THAAD battery. A local resident discovered it on a mountain near the heavily fortified inter-Korean border last week.

The lawmaker also said that the drone was "crude," and its operation year was disguised as 2013. He added that the drone began taking photos from areas 4 kilometers from the THAAD site, formerly a golf course, and filmed other military installations in Gangwon Province.

On Wednesday, Seoul's Defense Minister Han Min-koo told a parliamentary session that the origin of the drone appears to be "certainly" -- albeit not definitively -- the North. He called the infiltration as a "grave" violation of the armistice agreement. 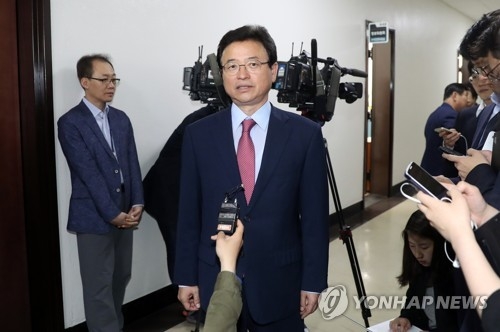 N.K. drone presumed to have spied on THAAD angle: lawmaker

N.K. drone presumed to have spied on THAAD angle: lawmaker