SEOUL, June 16 (Yonhap) -- A North Korean envoy has been appealing for larger humanitarian assistance from United Nations aid bodies on the margins of a multilateral conference in New York, a news report said Friday.

North Korean human rights ambassador Ri Hung-sik attended a meeting of parties to the Convention on the Rights of Persons with Disabilities at the U.N. headquarters from Tuesday to Thursday.

According to the Washington-based Radio Free Asia (RFA), it is unusual for North Korea to dispatch a delegation to a regular U.N. conference where it is not scheduled to deliver a keynote speech. 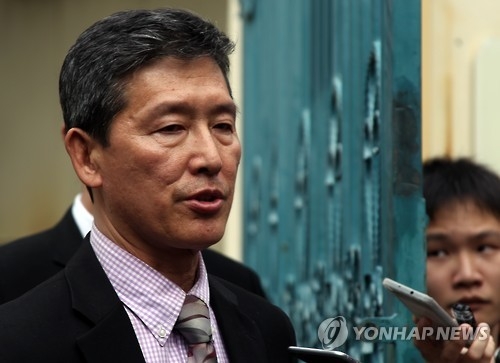 "Ambassador Ri isn't here simply to attend the conference," RFA quoted a U.N. source as saying. "The (real) reason can be found in the fact that he is accompanied by Ri Tong-il, director-general of the North Korean foreign ministry's bureau of international organizations."

Ri Tong-il served as Pyongyang's deputy ambassador to the U.N. from 2011-2014. He is well known within diplomatic circles and to the international media for conducting press conferences in fluent English.

The U.N. source said the two diplomats have been meeting with officials of UNICEF, UNDP and other aid organizations with representations in Pyongyang to seek greater humanitarian assistance.

"It appears that North Korea sent a delegation in an attempt to escape the deepening international isolation caused by the U.N. Security Council sanctions resolutions on its nuclear and missile programs," RFA said.

It also raised the possibility that the delegation held secret talks with U.S. officials on the three U.S. citizens who remain detained in North Korea following the release of 22-year-old Otto Warmbier this week.