SEOUL, June 16 (Yonhap) -- South Korea's unification minister-nominee said Friday that he agreed that a freeze on North Korea's nuclear programs would be a precondition for opening inter-Korean talks.

Cho Myoung-gyon made the remark after President Moon Jae-in said Thursday that South Korea is willing to hold unconditional dialogue with the North if Pyongyang does not make additional nuclear and missile tests.

The nominee agreed that the North's freezing of its nuclear arsenal would be a condition for dialogue when asked by reporters.

"The two Koreas should take an initiative in (managing) their relationship. But many international factors are linked to this and in particular, (how to resolve) North Korea's nuclear problem is important," Cho told a small group of reporters.

Moon's message spawned speculation that South Korea may lower its bar in seeking dialogue with the North. It marked the first time that Moon suggested conditions for inter-Korean talks since he took office in May.

But Cho said that the president's remark is in line with the government's stance in a broad sense that North Korea should show its sincerity in giving up nuclear weapons. 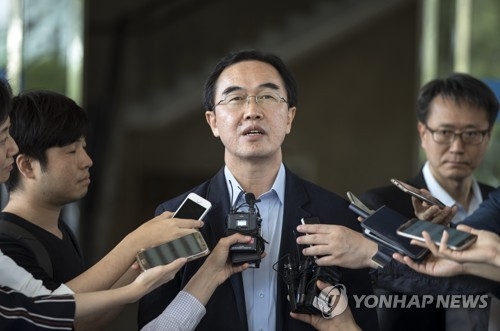 South Korea's unification ministry said that Moon seemed to flesh out his vision for engagement and talks with North Korea through his message delivered at an event to mark the 17th anniversary of the two Koreas' first summit.

Meanwhile, Cho said that he will study ways to win the release of six South Koreans detained in North Korea.

Six South Koreans, including three missionaries, and four foreigners have been held in North Korea.

"It is not easy as the issue would be resolved in connection with an overall improvement of inter-Korean ties. It is very regrettable," he said. "I will explore ways to resolve this problem."

N.K.'s freeze on nukes would be precondition for dialogue: nominee

N.K.'s freeze on nukes would be precondition for dialogue: nominee