SEOUL, June 16 (Yonhap) -- The nominee for South Korea's justice minister apologized Friday for his illegal marriage registration decades ago, but refused to withdraw his nomination, defending himself against other allegations about his ethical views and qualifications.

Ahn Kyong-whan, a law professor and former chief of the state human rights watchdog, was tapped on Sunday by President Moon Jae-in to become the next justice minister. He faces a parliamentary confirmation hearing in less than two weeks.

Immediately after his nomination, Ahn came under fire for his writings and past records that aroused doubts about his qualifications to lead the justice ministry, most recently his fraudulent marriage registration in 1975.

Ahn, in his 20s, registered his marriage certificate with the forged legal seal of his then girlfriend without telling her. The record was later nullified by a court.

"It was a misdeed out of selfishness that I still feel more than ashamed of, and it was completely my fault for which I have regretted all through my life," he told reporters.

But he used the news conference to refute other allegations including his latest book accused of alluding to sexiest views about women.

Ahn said he had no intention to belittle women and the writing was to provide an opportunity for introspection for men.

In the book published last year, he wrote, "A mid-aged wife, as do all mothers in Korea, care little about their husbands in bed since they're so engrossed in their children's education." The chapter was about a judge busted for buying sex.

He also wrote about "a spring of life welling out of a young woman's body" and "a man's desire to be reborn as he baths himself in that well."

The passages were descriptions of middle aged men's situation and psychology and were cited by the media out of context, he stressed.

"I do earnestly ask to take note of the book based on its context," he said.

Ahn made clear that he has no intention of withdrawing his nomination, vowing to fulfill his duties as justice minister and make full-fledged efforts to overhaul the prosecution, a major policy drive envisioned by the president. 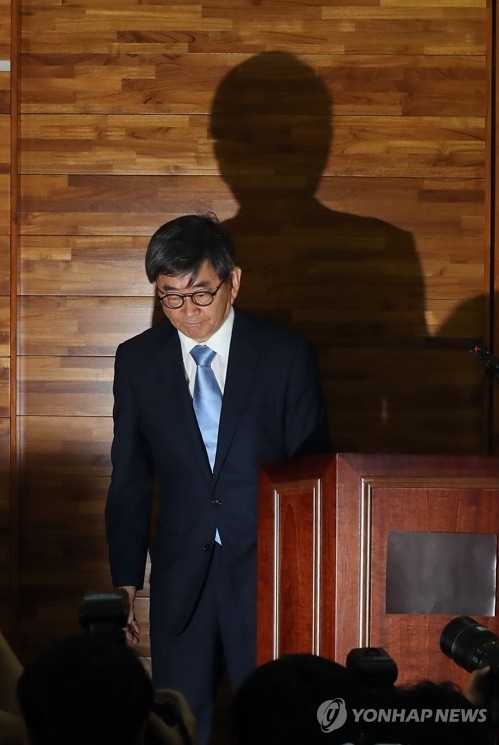