SEOUL, June 16 (Yonhap) -- A Seoul appellate court reduced the sentence for a former senior prosecutor convicted of bribery and tax evasion Friday, citing a lack of evidence for some of the charges.

The Seoul High Court sentenced Hong Man-pyo, a prosecutor-turned-lawyer, to two years behind bars, overturning the decision from a lower court that gave him a three-year jail term late last year.

The 57-year-old lawyer was a prominent prosecutor who investigated major corruption cases that involved the country's former presidents. Hong resigned from the prosecution office in 2011 and had since worked as a lawyer.

Hong was found guilty by the Seoul Central District Court in June for receiving some 300 million won (US$265,000) in 2011 from a former head of cosmetics company to help cover up his overseas gambling charges.

The lower court also found him guilty of taking another 200 million won in kickbacks from the same businessman in return for helping him win business deals.

The higher court acquitted Hong of the former conviction, citing a lack of evidence to prove that the money was to solicit a business favor. The court upheld the initial ruling on the latter bribery count, as well as tax evasion.

"The defendant has failed to fulfill his duties as a legal professional and exerted influence gained through his long career as a public servant," the court said.

Under the country's law, lawyers are prohibited from exerting influence with the prosecution to help their clients.

The court ordered Hong to forfeit 200 million won for the unpaid tax. He was charged with dodging taxes worth some 1.3 billion won. 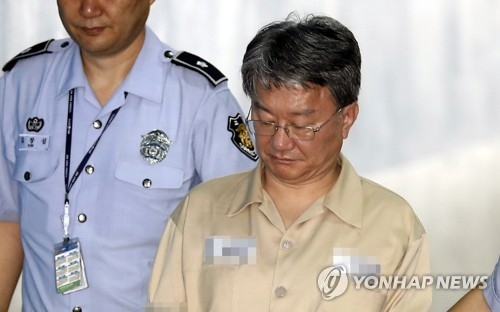