SEOUL, June 16 (Yonhap) -- A parliamentary committee deferred its decision on whether to adopt a report on the outcome of a confirmation hearing for Land and Transport Minister nominee Kim Hyun-mee on Friday amid criticism of her alleged ethical lapses and lack of expertise.

The National Assembly's Land, Infrastructure and Transport Committee decided to hold another plenary session next Monday regarding the report, committee officials said.

Kim's appointment does not require parliamentary consent, but the publication of the report is a crucial procedure before President Moon Jae-in officially appoints her.

During the hearing Thursday, opposition lawmakers grilled her, particularly over her alleged thesis plagiarism in 2001. She denied it.

The legislature has so far issued hearing reports for six of Moon's top government designates. 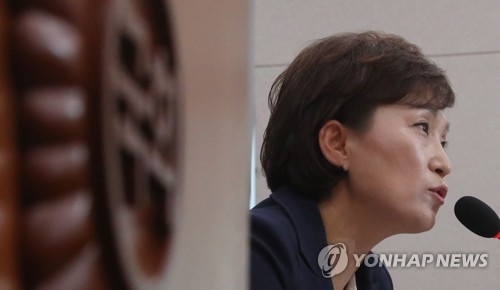