"The role of the Red Cross is critical at a time when an improvement of the two Koreas' ties is urgent," Kim was quoted as saying by the agency. "I hope that my successor will make efforts to serve as a catalyst for inter-Korean reconciliation and unification."

The Korean Red Cross is playing a role in arranging reunions of families separated by the 1950-53 Korean War and handling humanitarian assistance to North Korea.

Kim, chairwoman of the fashion company Sungjoo Group, took office in October 2014 as the head of the Red Cross. It was the first time that a business person has become the agency's head.

She is a former aide to ex-President Park Geun-hye, who was ousted in March over corruption charges. Kim was a co-head of the election polling committee for Park when she was running for the presidency in 2012.

She led a group of South Korean separated families to visit Mount Kumgang in North Korea in October 2015 for reunion events.

The Red Cross' central committee will name her successor and the nomination will be finalized after approval by President Moon Jae-in, honorary head of the Red Cross. 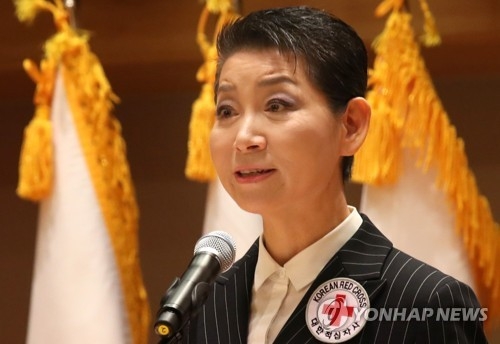