SEOUL, June 16 (Yonhap) -- Conservative parties quickened preparations Friday for their upcoming leadership elections as they face the daunting tasks of fostering internal unity and regaining public support in the wake of a defeat in the presidential poll last month.

The main opposition Liberty Korea Party (LKP) plans to elect its new leadership during a national convention July 3, with the one-day candidate registration slated for Saturday and the two-week campaigning set to begin Monday.

The splinter Bareun Party is set to announce its new chief during a party congress June 26. It finished the candidate registration earlier this week and is set to begin policy debates for its five nominees Saturday.

Both parties are pinning their hopes on the polls to refurbish their image and shore up voter confidence that has been eroded by a massive corruption scandal involving former conservative President Park Geun-hye, observers said.

The new leaders will be tasked with preparing the parties for the gubernatorial and mayoral elections, slated for June next year, which are likely to be a referendum on the Moon Jae-in government's job performance.

The LKP leadership race has been shaping up to be a three-way match among former South Gyeongsang Province Gov. Hong Joon-pyo, five-term lawmaker Won Yoo-chul and four-term legislator Shin Sang-jin.

Hong, a brash-talking prosecutor-turned-politician, is the highest profile among the candidates as he ran in the May 9 presidential election and came in second with 24 percent of the vote.

"The LKP must be reborn as a powerful opposition force to reclaim an (ideological) balance in South Korea's society," Hong told Yonhap News Agency over the phone. 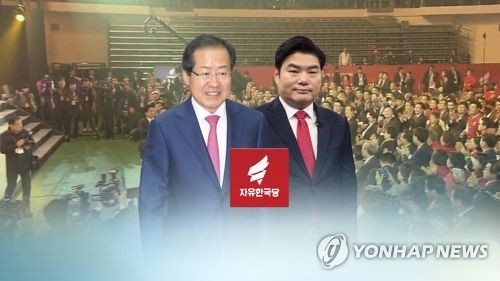 While throwing his hat in the ring Thursday, Won vowed to make a "young, healthy and open" party in a complete break from "factionalism and political hegemonism." Shin, for his part, pledged to rebuild a "wholesome rightwing party," representing new conservative values that genuinely serve citizens.

The LKP has decided to pick its new leader based on a vote by party delegates and a public opinion poll, which are weighted 70 percent and 30 percent, respectively.

The party was formed in January after its members defected from the then Saenuri Party, a precursor to the LKP amid a factional rift between them and those loyal to the ousted former president.

After six rounds of policy debates that begin Saturday, the party will pick its new chief based on a vote by party members and an opinion poll that are weighted 70 percent and 30 percent, respectively. 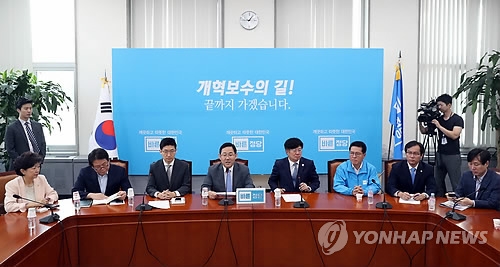