The former Olympic freestyle champion returned home from Sydney on Thursday after completing his four-month training for the FINA World Aquatics Championships that start July 23. He will depart for Rome on Sunday to set up a new training camp before moving to Budapest for the biennial event.

It will be Park's first appearance at a world championships held in a long course pool since 2011 in Shanghai, where he won his second 400 meter freestyle title. His first world title came in 2007 in Melbourne, a year before he won his first and only Olympic gold medal in the 400m free in Beijing.

"I think people want me to say, 'I will come back here with a gold medal," Park said at a press conference in Seoul. "Of course, I want to win the gold medal."

"As an athlete, you want to collect a good result in every event," he said. "But I especially want to do well in the 200m and the 400m, and I hope I can beat my personal best this time."

Park, however, said he is still mulling whether he should compete in the 100m.

"Short distance swimming is still tough," he said. "I did train, but I'm still considering whether I should compete." 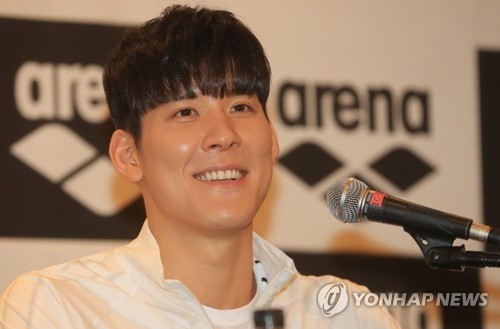 Park recently raced at the Arena Pro Swim Series in Atlanta, Georgia, where he won three titles in the 200m, 400m and 1,500m freestyle, while meeting FINA's "A" qualifying standards in all distances. He also came within the qualifying time in the 100m freestyle in the heats but chose not to compete in the final.

Last year, Park suffered a shutout at the Rio de Janeiro Olympics, where he failed to make the finals in the 100m, 200m and 400m freestyle, and withdrew from the 1,500 freestyle.

"Through last year's final competition, I realized that I still have energy to compete and can race," he said. "Although I started this season late, I'm quickly building up my form and training without injuries. I can do better."

Park skipped the 2013 worlds and missed the 2015 worlds while serving his 18-month doping suspension. He said there is pressure to show good results after a hiatus.

"It's not about competition, but I frequently thought about how I need to show something and prove myself," he said. "For this year's worlds, we'll see newcomers and those who have performed well at the Olympics, so this is a good opportunity for me."

Park admitted that it will be difficult for him to break a world record at the upcoming worlds, but the competition will still give him a valuable lesson before entering the 2018 Asian Games in Jakarta. He currently has six Asian Games gold medals.

"I think next year's Asian Games will probably serve as a good period for me to set a world record before I quit swimming," he said. "But it's going to be too hard for me to break a world record at the upcoming worlds."