SEOUL, June 16 (Yonhap) -- A U.S. House subcommittee has passed two bills on North Korea including one calling for the promotion of human rights in the communist country, news reports said Friday. 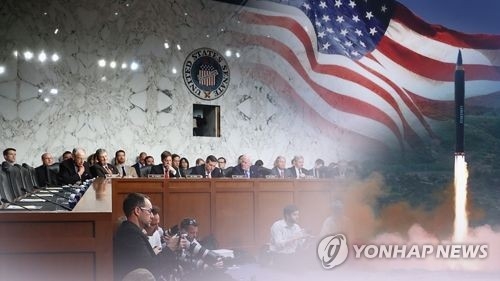 The bill aims to provide humanitarian assistance to the North Korean people and allow them to enter the U.S. as refugees. It also seeks to provide financial aid to civic groups and nonprofit organizations that work to promote human rights and democracy in the reclusive state.

The panel also passed the DPRK Act of 2017 (H.R.2397), which aims to increase the dissemination of outside information into the North.

It amends the 2004 human rights act to authorize the U.S. president to "distribute or provide grants to distribute information receiving devices, electronically readable devices, and other informational sources into North Korea," according to Congress' website.

It also calls for broadcasting American, Korean, Chinese and other popular music, TV programs, movies and popular cultural content to the North.

The bills will be referred to the House Foreign Affairs Committee and then a floor vote before being sent to the Senate.