SEOUL, June 16 (Yonhap) -- A former presidential aide and key figure in an influence-peddling scandal that led to the ouster of former President Park Geun-hye stood before a court Friday to face his first trial.

Woo Byung-woo, the ex-presidential secretary for civil affairs, arrived at the Seoul Central District Court at 1:40 p.m., making his first public appearance in two months after he was summoned by the prosecution for questioning in April.

The 50-year-old former prosecutor is accused of aiding and abetting Park's longtime friend Choi Soon-sil in meddling in state affairs and letting her coerce large firms into paying large sums of "donations" to two foundations allegedly controlled by Choi.

"I will faithfully stand trial and make myself clear at the court," Woo told reporters as he entered the courthouse.

When asked by reporters how he feels about Park, who is detained and standing a separate trial, he said, "(I) feel sorry."

Prosecutors suspect Woo tried to stop a special presidential inspector's investigation into the scandal and interfered in appointments of government officials.

He is also accused of perjury as he denied intervening in a prosecution probe into failed rescue efforts during the 2014 sinking of the Sewol ferry that killed more than 300 passengers aboard, mostly high school students. 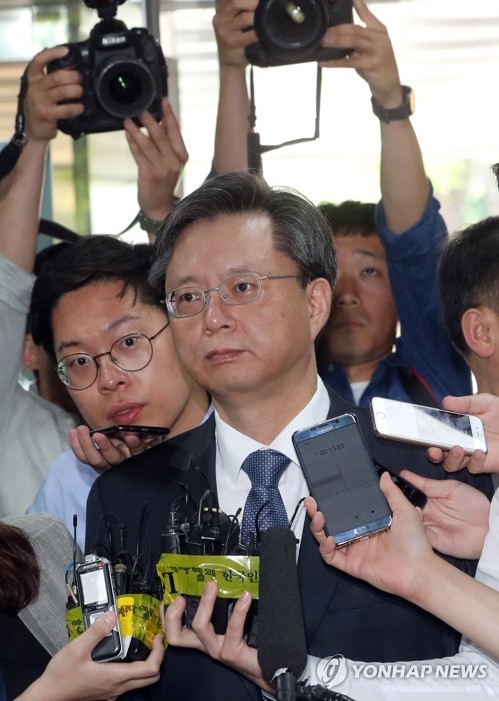