Reps. Kim Boo-kyum and Do Jong-hwan of the ruling Democratic Party were appointed the new interior minister and minister of culture, sports and tourism, respectively.

Kim Young-choon, also a ruling party lawmaker, was appointed the minister of oceans and fisheries in a ceremony held at the presidential office Cheong Wa Dae.

With the three new ministers, the number of new Cabinet members appointed under the new Moon Jae-in administration has now come to five. They include Prime Minister Lee Nak-yon and Finance Minister Kim Dong-yeon, who doubles as the deputy prime minister for economy. 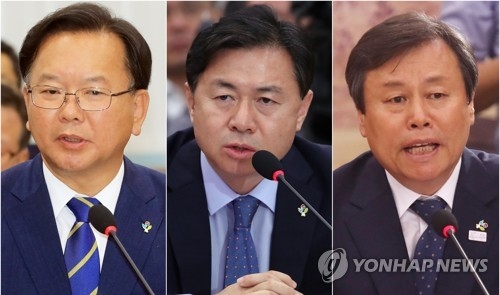 The president has 14 more Cabinet members to appoint before what will truly be his first new Cabinet can set sail.

Moon has named 11 other nominees for new ministers, but the opposition-led parliament refuses to endorse Foreign Minister-nominee Kang Kyung-wha over her past wrongdoings that include false registration of her address for her daughter.

Transportation Minister-nominee Kim Hyun-mee, another incumbent lawmaker from the ruling party, has undergone her confirmation hearing, but the parliamentary hearing committee has failed to issue a report on the outcome of the hearing. The committee is expected to again hold a meeting on Monday to discuss its endorsement of Kim.

Confirmation hearings for the remaining nine minister-nominees are set to be held over the coming weeks.

Unlike the prime minister and chief justices of the top courts, new ministers do not require parliamentary approval for their appointments.

Still, an appointment of a new minister without the parliament's endorsement may quickly lead to a strain in relations between Cheong Wa Dae and the opposition-led parliament.

President Moon earlier appointed the new head of the Fair Trade Commission, Kim Sang-jo, who had failed to win the parliament's endorsement.

The ruling Democratic Party controls 120 seats in the unicameral parliament, the largest number of seats held by any single party, but still falls short of a house majority.

The main opposition party has threatened to walk out of the parliamentary session for good should the president appoint his pick for the new foreign minister despite its repeated opposition.

Moon has asked the parliament to again try and issue a report on Kang's confirmation hearing held last week, but noted he may appoint her without the parliament's endorsement should it fail to do so.