It marked the first one-on-one meeting in 11 months between the finance ministers of the neighboring countries at odds with each other over the issue of deploying an advanced U.S. missile defense system in South Korea.

Xiao came to South Korea to attend the second annual meeting of the Asian Infrastructure Investment Bank (AIIB) that is under way in the southern resort island of Jeju.

Details of the meeting between the two ministers were not made immediately available. 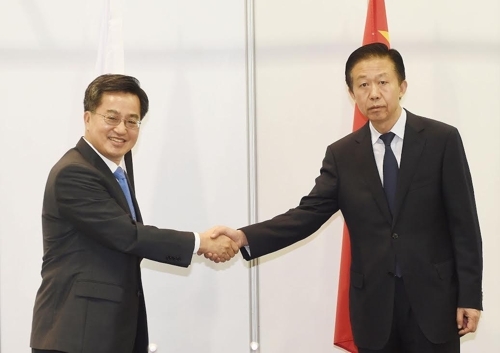 The meeting -- the first since President Moon Jae-in took office in May -- came as Beijing is flexing its economic muscle against Seoul in protest of the deployment of an advanced U.S. missile defense system in South Korea.

China, South Korea's largest trading partner, has imposed restrictions on South Korean imports and banned the sale of group tour packages to South Korea. These actions are seen as apparent economic retaliations over the deployment of the Terminal High Altitude Area Defense system in South Korea.

Seoul and Washington deployed the THAAD battery as a means to counter North Korea's evolving nuclear and missile threats. But China has repeatedly expressed opposition against the U.S. anti-missile system out of concern that the deployment could hurt its security interests. 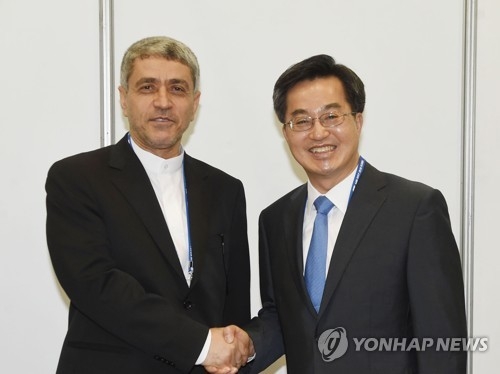 Kim also held talks with his Iranian counterpart Ali Tayebnia on the sidelines of the session. Kim requested support for South Korean firms seeking business related to the AIIB's investment there.

Kim told the Iranian minister that, "Economic cooperation between the two countries is diversifying to high-value business fields."

In addition, Kim met separately with senior Australian and Laos delegates to the AIIB meeting, according to his ministry.

Earlier in the day, Kim threw Seoul's weight behind AIIB's pursuit of sustainable infrastructure as he called on the bank to come up with a comprehensive strategy for investment to stay on the path of progress.

The multinational lender -- set up in 2015 to fund infrastructure projects in Asia -- has so far approved 16 projects worth $2.5 billion.

South Korea joined the AIIB as one of its founding members.

The bank has adopted resolutions approving three applicants -- Tonga, Argentina and Madagascar -- to join the bank, bringing its total approved membership to 80.

The bank said the three prospective members will officially join AIIB once they complete the required domestic processes and deposit the first installment of capital with the bank.

"Well-integrated infrastructure and enhanced connectivity between Asia and the rest of the world has far reaching benefits for the global economy," said AIIB President Jin Liqun, according to the bank.

The bank is widely viewed as a potential counterbalance to U.S.-led multilateral lenders, such as the Asian Development Bank, amid growing Chinese economic clout.

South Korea "fully supports AIIB's pursuit of sustainable infrastructure," Kim said in an opening speech at the AIIB's second annual meeting. The meeting, which drew about 2,000 participants from all of its member states, is set to run through Sunday.