SEOUL, June 16 (Yonhap) -- South Korea's police chief apologized for the death of a farmer on Friday, one day after a hospital confirmed that he had died from injuries sustained when he was hit by police water cannon.

"I offer my sincere apology and send my deepest condolences to the late Baek Nam-gi and the bereaved family," National Police Agency Commissioner-General Lee Choel-seong said.

Baek died of acute renal failure in September last year after months of hospitalization. He was struck by a water jet during a protest in November 2015. The rally was staged to urge the government to raise rice prices.

On Thursday, the Seoul National University Hospital, which treated him, unexpectedly announced that his death was from an "external cause," reversing its previous assessment that he died from illness.

The hospital said it will correct his death certificate, citing a decision made by its ethics committee.

President Moon Jae-in had pledged to launch a fresh probe into Baek's death during his election campaign.

In May last year, his family filed a damage suit against former top police officials and doctors. The prosecution had questioned them but made little progress in the investigation. 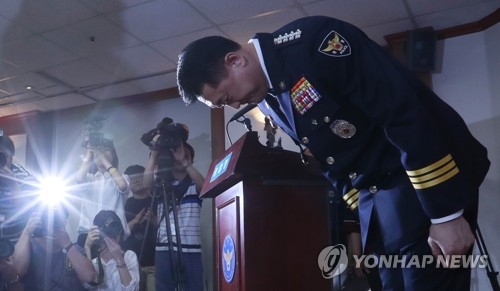